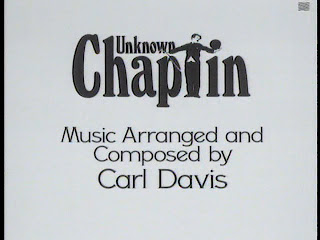 In this second part, Carl Davis talks of his work on Chaplin pictures.
About Chaplin pictures, do you need a special authorization from the Roy Export Company and the agreement of the family to work on a film?

Yes, I do. I have had a very close relationship with them, which started with the Hollywood series in the 70s. You couldn’t do anything about Hollywood comedies without Chaplin. So my colleagues, Kevin and David Gill, had a very strong relationship, initially with Rachel Ford and the wonderful woman who followed her… But obviously, from 1918, Chaplin owned his own films and was very clever. He kept the copyright on them, so the family owned all his output from that point on. So you cannot avoid dealing with them, because they own it. At first, we made the Hollywood series in which Chaplin was incorporated into the general picture of comedy. Then, I got to know his films. Then, a very interesting thing happened. My colleagues made Unknown Chaplin (1983). This was stimulated because there is a legend that Chaplin destroyed his out-takes because he didn’t want people knowing how he worked. Sometimes in the mid-80s, a number of cans were found that contained the out-takes for the Mutuals which are the 12 films he made in 1916 and 1917. He never owned those. They are in the Public Domain. After he finished the 12th Mutual, he then formed United Artists with Mary Pickford, Douglas Fairbanks and D.W. Griffith. From that point on, he was in control of the destinies of his own films. They discovered all this material, which revealed that he actually developed these films through improvisation. And he filmed the improvisations. And so we learned how he built up sequences. And this became the basis of the most interesting part of Unknown Chaplin. The rest is home movies, sequences that were cut, and so on. But this discovery of a process, being able to actually film and record the process was fascinating. And everything then had to be approved by the family. Chaplin was gone, but his widow Oona and the eight children were still alive. So it had to be done with their approval. I remember this extraordinary moment of walking into an editing room in London. Oona and Geraldine Chaplin were watching the first episode about the Mutuals. They were looking at materials they had never seen before in their lives. It was Charlie in 1918, before any of them were even born. This man who they knew so well, but didn’t know. It was amazing… If you could have seen it, it was as if they were eating an editing machine (Laugh) They were devouring the machine…(Laugh) It was an atmosphere that was unbelievable. So I felt very wedded to them, really. I felt it was very special this series.

Time went by and we had the whole Napoléon experience, other comedies and so on. Then we arrive at the year 1989. Kevin and David had an idea regarding the film City Lights that was issued in 1930. It was an interesting film, in that when Chaplin started to make it, in 1926, he thought it would be a silent film with title cards. And then, by 1930, it was clear that silent film was finished as a commercial vehicle. What would he do with this film? Everybody was turning their films into sound films. I don’t know, but I would imagine he really did face a terrible crisis. Like for instance, if he wrote dialogue for The Tramp, would people take it? A solution was actually to write a score and record a score, incorporating some sound effects, but principally music. He wrote his own score. And we had the idea that it would be interesting to try to reconstruct it as if it was a silent picture. To take the score as it exists in its recorded form and see whether it could be transcribed or put into such a shape as it could be performed as it were as symphonic silent classic. We did a series of performances, there was five, I think. It established a vogue. Everywhere I went with the Chaplin, they said: “Let’s do another!” We did The Gold Rush and we did The Kid. Then I stopped and they picked Timothy Brock for Modern Times and he did everything else. And, it’s fine. I conduct those scores as well. Obviously everything emanates from the Estate, the permission, even initially the support. And when you want to put on, like we do on Sunday, The Gold Rush, everything has to be obtained from the Chaplin Estate. The interesting thing was convincing the children it was a good idea because they were very protective.

Did you use the music he composed?

Oh always! I am very faithful to that. By then, he added to his achievements, writing, directing, producing, acting, a fifth skill, composing. Even though he was not trained…

David Raskin worked with him.

That was on Modern Times. There are very few who stayed with him for more than one film! He was very very demanding. Later, when he was very old and doing these new versions with specifically television in mind, he had Eric Rogers who did a whole group of films.

Which version of The Gold Rush are you showing on Sunday?

On Sunday, you’re going to see the 1925 cut of The Gold Rush. What happened is that the Second World War started. Chaplin had to meet a deadline and deliver a film to a distributor. And he had lost his public really; he had lost the entire European market after 1939. After The Great Dictator, his films were banned. He was losing ground in terms of sales. He got to the forties and he had to have something to deliver. He turned to The Gold Rush. He cut all the title cards completely and he wrote and recorded a score. It’s very eclectic; it’s drawn from a lot of different sources. And he cut the film down; that version is much shorter than the 1925 one. David Gill, I think, persuaded the family to reconstruct the 1925 version. It was difficult, you know. “Would have Daddy liked it? Isn’t 1942 his final word?” He did convince them to support this. The family allowed me to enter the vaults of their archive below ground in Geneva. It’s like going to Niebelheim (Laugh). You go outside Geneva, you go down the Alps, down and down… And there is this enormous storage facilities. And on these moving shelves, there are the complete Chaplin archives. So we found the boxes for the 1942 recording sessions, all the notes and all the scripts. And I found lots of music that wasn’t used in 1942 because I had to stretch this film, because not only were we going to restore the material he cut, but we were also going to slow it down. We are going to screen it on Sunday at 22 fps. We are going to have 5 or 6 more minutes of it. All the title cards are back. There is no narration, no funny little voice. What I had to do is to take the material Charlie I done and extend it. I had to reshape it to fit this new cut. So we are basically hearing his concepts of music for 1942, but the print is the 1925 version. That’s very interesting. It’s more sophisticated and the ending is changed, because of his wife. The first ending is a full open-mouth kiss. I mean a long open-mouth kiss between him and Georgia. In the 1942 version, the story ends as they just walk off and climb the ladder to an upper-deck. It’s by no means as rock solid as you think. The impression you get at the end of the 1925 version is that they are going to get married and live happily ever after. In the 1942 one, it’s much more ambiguous. They meet, they do kiss, but….it’s not quite so sealed.

Is there a chance that your Gold Rush score will appear on DVD at some point ?

I don’t know. There are no plans.

You wrote scores for epics like Ben-Hur, Wings or The Big Parade, but never for a western. Do you hate westerns or is it that you never had the opportunity to do one ?

I has not arisen really. We did in Hollywood a whole episode about westerns. The nearest I got to it was The Wind which is not a western but is set in Texas.

You scored mostly American silents. Would you like to write music for a British silent ?

I would love to. It just hasn’t arisen. The only continental silent picture, outside Napoléon, I have done is Waterloo. And I did restore the score for Le Joueur d’Echecs by Rabaud.

Oh yes, The Miracle of the Wolves. The music is more fragmented, in what exists of the score. And oddly enough, he reuses some of it in Le Joueur d’Echecs. I was thinking: “Hello! I’ve seen it before…” It’s far from complete.

Do you like working closely with the film restorers when you prepare a score, especially with Kevin and David?

Oh yes, that was a very good team. From 2000, the annual review stopped the Channel 4 commission. It had gone through successive regimes and the regime that came in 2000 decided it would stop commissioning. And that pulled the plug. And I have done only one large scale silent since which is The Godless Girl from the DeMille estate. I did two very good documentaries, one on Garbo, that TCM commissioned, and one on the man who made King Kong, Merian C. Cooper. In fact, my one ambition would be to make a score for Grass. The principal donor pulled out in 2000 and that’s when things stopped. But then, I decided I had to create independently something I was in control of. That’s when I had the idea to score the complete Mutuals, the 12 Mutuals and own prints of them. I wanted to be in control and the films are Public Domain. I am not offending the Chaplin Estate. They should have done it long ago themselves! (Laugh) And that proved very successful and people are doing them all over the place now. I got the best prints I could through David Shepard and wrote my own scores. And the BFI did DVDs of the twelve.

It’s a shame that so little of your silent film scores are available on DVD. I’m thinking of Broken Blossoms, Thief of Bagdad…

The Rohauer Estate who used to own all those films has been sold now to a man who I know. And he is trying to put a handful out on Kino. But Kino does these multiple treatments… But there are a number, including Broken Blossoms, which on the list to be done. There are more coming through. But because Kino had already released another version of Thief of Bagdad and Intolerance, I lost out on that. But you can get The General and Our Hospitality through Kino.