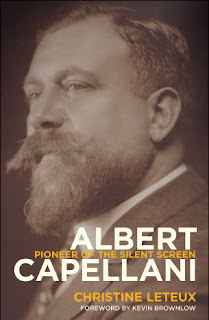 "Silent Cinema Pioneer" by David Luhrssen
D.W. Griffith has gotten all the credit for developing the grammar and syntax of cinema, but recent years have seen research showing that other filmmakers around the world were working toward (and probably reaching) those same breakthroughs. According to Christine Leteux, one of the most important overlooked innovators was a Frenchman who directed many of his country’s early shorts, rose to a creative peak before World War I cut him short, worked in Hollywood after being discharged from the military for poor health and returned home to obscurity.Albert Capellani: Pioneer of the Silent Screen (University Press of Kentucky) is a short work on an important subject made possible by the increasing number of lost films from the early 20th century that have been rediscovered or reconstructed. The author of a previous book on silent director Maurice Tourneur, Leteux has examined Capellani’s surviving work and found that he directed France’s first full-length feature film and was in the vanguard for his use of split screens, 180 degree panoramas and intelligent mixes of studio and location shots. “In comparison, D.W. Griffith was just starting to shoot his first picture… which has none of the sophistication shown by Capellani” in his 1908 detective movie, L’Homme aux gants blancs.Capellani’s death in 1931 was scarcely noticed. Ill health had sidelined him for years and he advent of talking pictures swept away memories of his work. Movies were usually regarded as ephemeral during his lifetime, but from the vantage of today, they represent one of the great new art forms made possible by advances in technology. Leteux shows that Capellani brought an understanding of technical possibilities together with a respect for the art of storytelling.